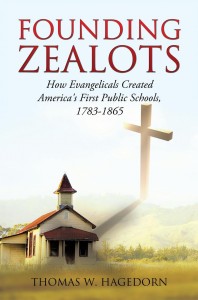 “It’s quite ironic that evangelicals–who must regularly fight for their religious freedom in our public schools–were actually responsible for their founding,” states the author. “Perhaps just as ironic is that universities, who loudly proclaim their commitment to diversity and inclusion, seem to be just as determined to keep evangelicals, Republicans, and capitalists off their faculty.”

When Thomas Hagedorn stumbled across those fifteen words in Ohio’s first Constitution, he had no idea that it would lead him on a 20-year quest to answer one simple question:

How could Ohio’s first public schools have promoted morality and religion, when today they are either indifferent or hostile to those values?

After studying hundreds of old letters, diaries, reports, and biographies he discovered that the teaching of religion and morality was commonplace, not only in Ohio’s first government schools, but all across 19th century America. Surprisingly, he found that most historians have ignored the Christian philosophy, motives, and leaders that laid the foundation of that vital institution. For the first time, Founding Zealots tells the dramatic story of this five-decade-long struggle, the men who fought it, and the reasons why other historians have instead left us with a very different, much more secular account.

Based upon exhaustive research, Founding Zealots shows that:

•    Horace Mann’s role as the founder of our public schools is a myth.
•    Evangelicals–many of them devout ministers and missionaries–started the schools primarily to promote Christian evangelism and discipleship.
•    Marxist theories underlay some of the accounts of mainstream historians.

Thomas W. Hagedorn’s new book Founding Zealots is available in paperback and as an eBook. For purchases of 10 or more or if you live in zip codes 45230, 45244, and 45255 use the Contact form on this site to receive a discount.

Watch our video trailer for more information about this insightful book.